The purpose of this report is to provide a brief introduction to the civil registration and vital statistics (CRVS) systems in Kenya.

The information was collected through a questionnaire completed by the Civil Registration Services in December 2018 and supplemented by a desk review of available documents. The report presents country background, selected indicators relevant for CRVS improvement processes, stakeholders’ activities as well as resources available and needed to strengthen CRVS systems, coordination, among others. 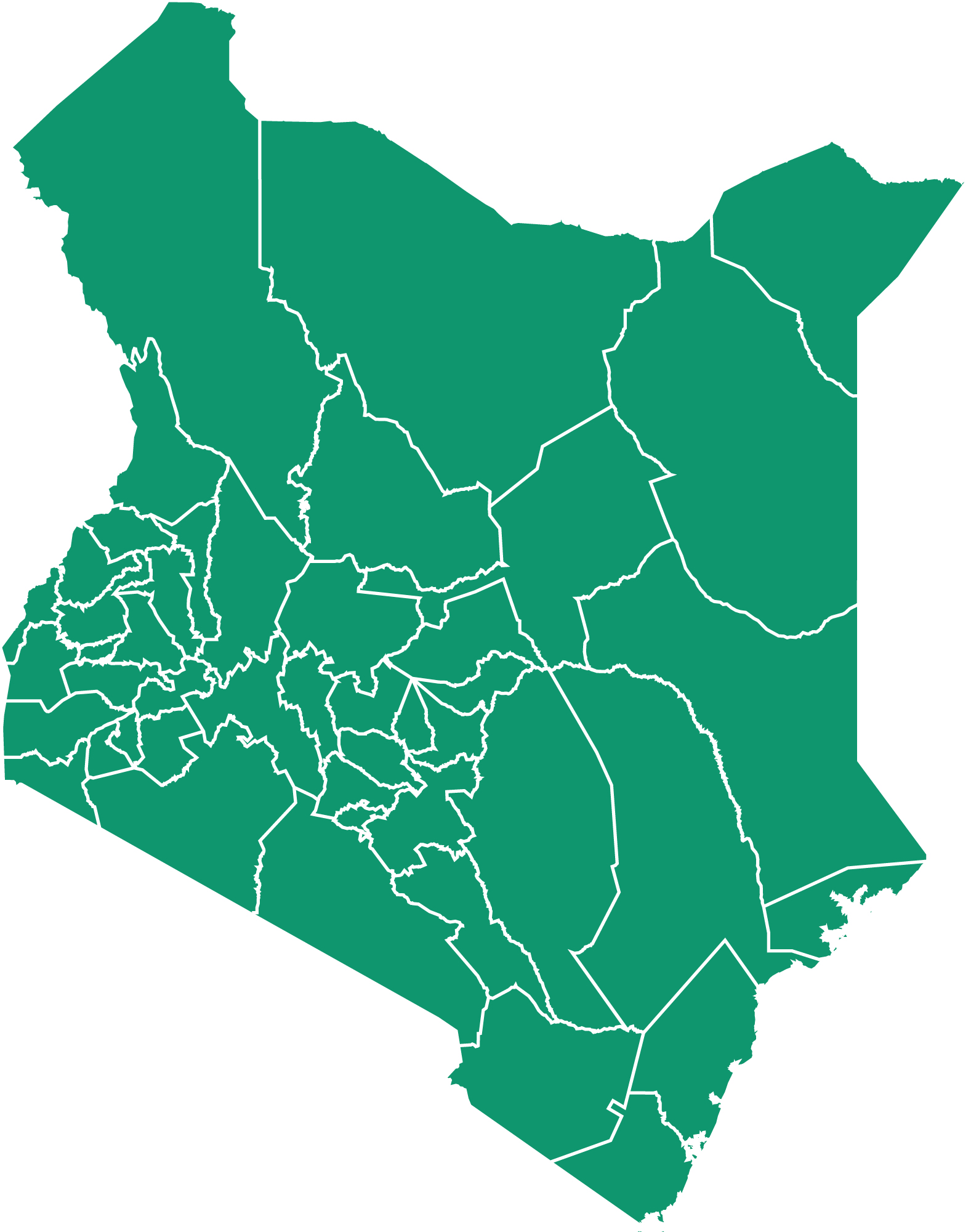 Disclaimer: The boundaries used on this map do not imply official endorsement or acceptance by the United Nations.

Compulsory registration in all areas and communities was extended in stages, beginning with Nairobi and Nyeri, on March 1, 1963, until the whole country was covered by September 1, 197110 .  CAP149 was amended in 1972 to account for compulsory registration of all births and deaths occurring in Kenya irrespective of nationality, and for registration of births and deaths of Kenyan citizens occurring abroad. In 2012, a National Registration and Identification Bill was drafted and introduced for the first reading in the Senate in 201411 . The scope of the bill has now expanded into the Huduma Bill,2019, which seeks to harmonize and consolidate the law on registration of persons; provide efficient and accessible Government services through various integrated delivery platforms for the convenience of citizens; establish a National Integrated Identity Management System (NIIMS); assign unique personal identification numbers (Huduma namba) to persons in a national population database; and provide easy mechanisms for the registration of births, deaths and marriage, among others.

There is a total of 10,666 sub-locations manned by Assistant Chiefs and 10,465 health facilities, which serve as the registration centres in the country.

Most households are estimated to be 5 to 10 kms away from the Assistant Chiefs’ offices and health facilities. The estimated time it would take most households to cover the distance on foot between 1 to 4 hours13 . A local civil registration office (CRO) in Kenya serves populations ranging in size from 100,000 to 1 million people, with an average size of 360,000 people. A CRO covers on average about 5,500 square kilometers14 .

Notification of the occurrence of births and deaths: The original notification slip is given to the informant for the subsequent application for legal registration and obtaining certificates, while the duplicate remains with the assistant chief or the health institution.

There are other forms also used for late registrations and applications for certificates. Forms are completed in duplicates with the same serial number. Original forms are stored in the CRO and duplicate forms are sent to be archived at the CRS in batches of 250 copies. There is no fee for registering births and deaths within the legally stipulated period of 6 months. A fee is charged for late registration and issuance of birth and death certificates as shown in Table 1.

There are millions of historical records on births and deaths, dating from around 1905, that are being stored in bound volumes in the local CRO (original forms) and at CRD headquarters (duplicate forms). From 2013 to 2017, the World Bank supported the scanning of the original documents and keying-in of digital information from individual records17 . The digitization of historical births and deaths records has, as of January 2018, over 16 million birth records and about 600 thousand death records digitized. About 20 million records for both births and deaths are pending digitization18 .

Interface with other sectors and operations

In 2015, the Government of Kenya launched the Integrated Population Registration System (IPRS) to transform public service delivery by providing citizens access to various public services and information from One-Stop Shop citizen service centres, commonly known as Huduma Centres.  One of the functions of these centers is to issue  birth certificates when informants produce a birth notification document. This is processed through an integrated technology platform. Data from the civil registration system feed into the IPRS and links with other registration agencies to provide data on the identity of citizens and foreign nationals. Most of the counties are currently operating Huduma centers19 .

In an effort to improve governance, the government appears to be keen in making investments towards more secure identification. A new generation of cards were released in 2015 and there are plans to introduce digital IDs from 202020 .

The Kenya National Bureau of Statistics (KNBS) has the legal mandate under Schedule II of the Statistics Act21 for the collection, compilation, analysis, publication and dissemination of “Vital occurrences and morbidity” and the co-ordination of the national statistical system. . Since 2013, the Civil Registration Service collects, compiles and disseminates vital statistics through its yearly vital statistics report22 . The report presents tables, graphs and narratives on birth and death data collected from vital events registers by sex, place of occurrence and a few other background variables. It has also a chapter on causes of death. The 2017 issue is ready for dissemination but has not yet been made available to the public. Vital statistics compilation and dissemination in CRS is supported mainly by UNFPA. There was no budget allocated from the government treasury for the 2018/2019 fiscal year for the compilation of vital statistics from the CR system.

Vital statistics sourced from CRS has been disseminated through the Economic Survey and Statistical Abstracts published annually by KNBS.

The Ministry of Health ​ (MOH) currently compiles the Cause of death (CoD) statistics from its health institutions and maintains the database at national level.  Causes of death are currently being compiled using ICD10. The Civil Registration Service also collects, compiles and disseminates causes of death data through its yearly vital statistics report. Causes of death information obtained from CRS is also compiled and disseminated by the KNBS through the annual Economic Survey Report and Annual Statistical Abstracts.

Deaths occurring in the communities are not routinely certified by qualified medical personnel. The MOH worked with CDC on a project in Homabay County from 2014 to 2017 to train local registration agents to administer paper-based verbal autopsies (VA). The VA tools, which uses a computer algorithm to assign causes of death, were piloted in several villages in these past few years. However ,the project was not scaled up due to a number of challenges, one being sustainability due to cost. 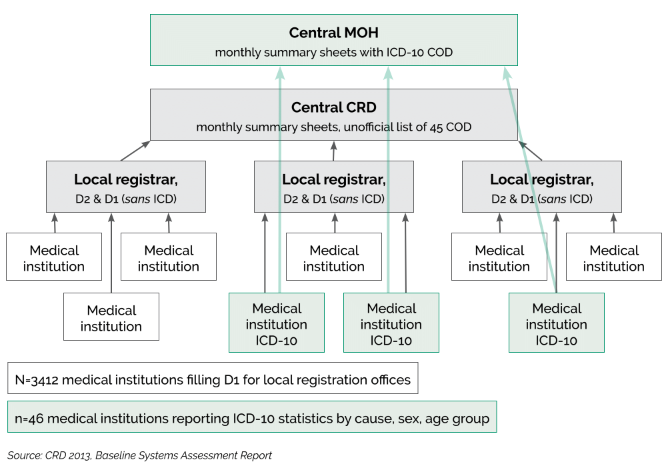 CRS is currently modernizing its information system. A web-based electronic system to automate the Civil Registration and Vital Statistics System (CRVSS) has started. This system has been piloted in a number of counties. Simultaneously, the digitization of records is being undertaken. As the rollout of the system country-wide is proceeding to enhance service delivery, electronic media such as CDs and flash discs are used to transmit CR information from sub-counties to the CRS headquarters

Several countries are using mobile technologies in one or several stages of the civil registration processes. Several small-scale pilots have been tried in Kenya. For instance, from 2008-2012, the Finnish Government funded a research project where NOKIA provided smart phones to community-based organizations in which the birth registration form (B1) was programmed into it.

WHO, through the Monitoring of Vital Events with IT component (MoVE-IT) project, piloted the use of mobile phones with RapidSMS, where community health workers notified the occurrence of births and deaths in two districts (Naivasha and Gilgil) in 201323 . Although there were efforts to test use of mobile technology in the past, there is currently no such application in any CR process in Kenya.

There an institutionalized monitoring and evaluation framework for assessing the implementation of the CRVS plan, but it is not applied consistently.

The development partners that provided and continue to support the civil registration and vital statistics systems improvement initiative are listed below.

Compilation of vital statistics and capacity building Strengthen health facilities capacities, including preparation for the notifications of births and deaths, particularly in rural areas

Prevent and control diseases and improve reporting of occurrences

Similarly, CRS has proposed the following to enhance the coordination between key national CRVS stakeholders and development partners at the national level:

Most of the research works listed below are results of an Internet search.

Kenya is in its second 5-year strategic plan period, which started in 2018. The plan sets clear priorities for the development of a well-functioning civil registration and vital statistics system by taking stock of challenges not resolved in the first 5 -year plan (2013-2017) and identifying new challenges and opportunities. Some of the major challenges are inadequate budget, distance to registration centres, requisite capacity and skill mix in registration, monitoring and evaluation, and compilation and dissemination of vital statistics.  Marriage and divorce registrations are conducted by the Attorney General and State Department of Justice without apparent linkage with that of CRS and no provisions for the compilation and sharing of information for statistical purposes.

There are several initiatives that CRS has undertaken to strengthen its working arrangements with key stakeholders, such as MOH to increase the completeness of birth and death registration by strengthening the notification services provided by health facilities. To this effect, the MOH has issued directives in 2015 to all County Health Directors to screen all infants that visit maternal and child health (MCH) and outpatient clinics for evidence of birth registration and provide notifications for those not registered; expand local registration services; and improve the notification of events that occur in the community, among others. The collaborative work with MOH is expected to improve cause of death reporting through ICD-10 training and verbal autopsy. Clearing the backlog of unregistered events is progressing well with support from development partners.  Discussions have started on the issuance of Unique Personal Identifiers (UPI) and when implemented it would facilitate linkages of several systems with the CRVS system. The Government of Kenya’s bold initiative in technology and innovation creates a conducive environment for eCRVS systems in the future. 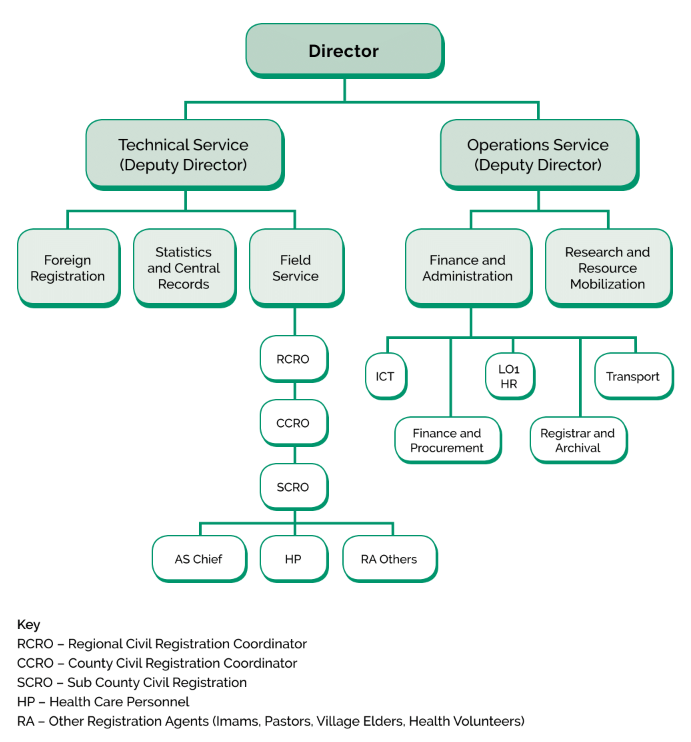 Organizational chart of the Civil Registration Service of Kenya, January 2019